Profile of the supervisor

Prof. dr. Andreas Herrmann studied chemistry at the University of Mainz (Germany). From 1997 to 2000 he pursued his graduate studies at the Max Planck Institute for Polymer Research in Mainz. Then he worked as a consultant for Roland Berger Management Consultants in Munich (2001). In the years 2002 and 2003 he returned to academia working on protein engineering at the Swiss Federal Institute of Technology, Zurich. In 2004 he was appointed as a head of a junior research group at the Max Planck Institute for Polymer Research. In 2007 he moved to the Zernike Institute for Advanced Materials at the University of Groningen, The Netherlands, where he holds a chair for Polymer Chemistry and Bioengineering.

Profile of the research group

The Herrmann group deals with bioorganic hybrid structures and genetically engineered biomacromolecules. For the generation of such materials we employ methods from organic- and polymer chemistry as well as from molecular biology. Special emphasis is paid to combining and integrating different synthetic procedures in a synergistic way. For evolving complex functions the accurate assembly of different building blocks into well-defined nanoscopic aggregates is an important requirement. Finally, the application of these materials is explored in the context of, catalysis, bioelectronics, diagnostics, advanced drug delivery vehicles and anti-infectives. 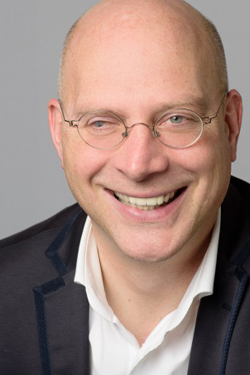